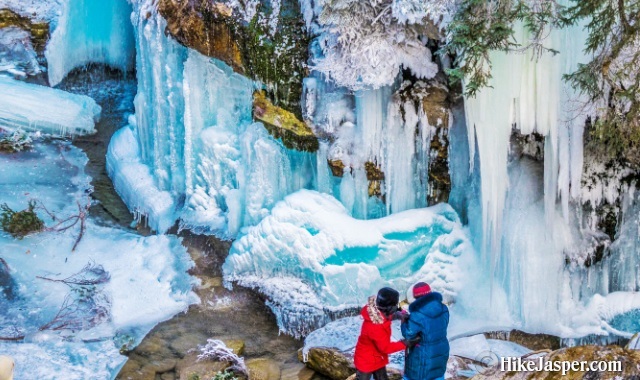 Most Interesting Canyon in the Rockies Maligne Canyon from 1.5hrs

Explore the Canadian Rockies' most interesting canyon with multiple bridges and access points. 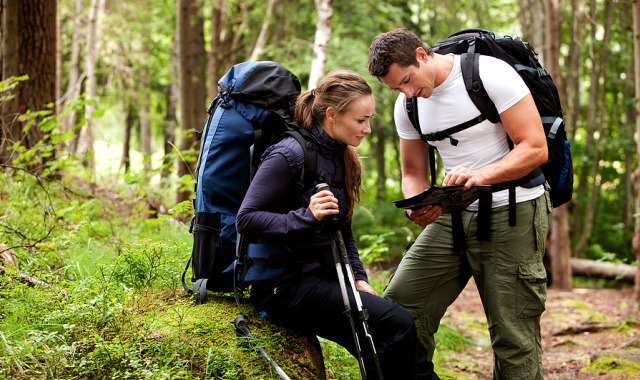 Jasper National Park has become a gem the World over for its' ability to enhance the human spirit in many ways, and hiking is certainly no exception. 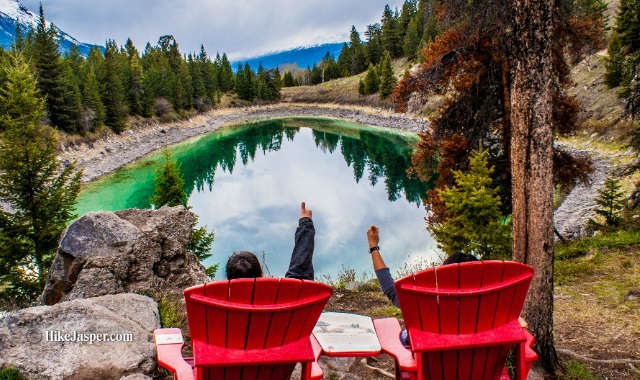 Beautiful Shades of Jade One of Canada's Natural Wonders.. Hike The Valley of the Five Lakes

Beautiful Clear Lakes with Unique Shades of Jade and Blue - Experience One of Canada's Natural Wonders. 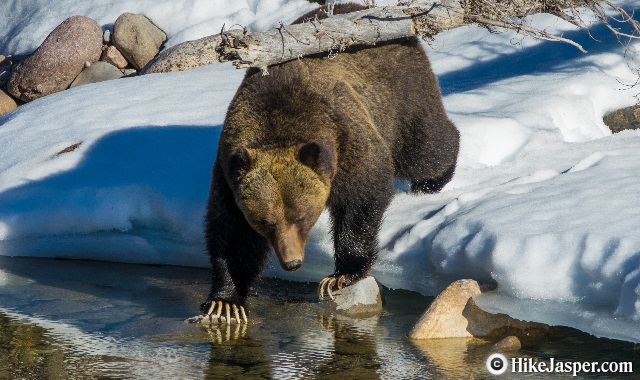 Be aware and be open to sharing the hiking trails with Jasper National Park's natural residents. 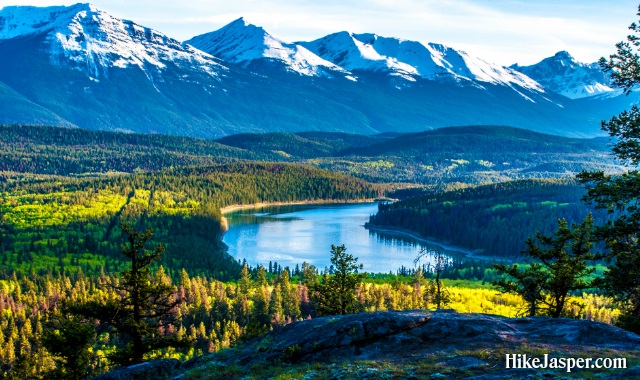 Pyramid Lake and Athabasca Overlook hike is a favourite. The view for the work performed is balanced in the view's favour. 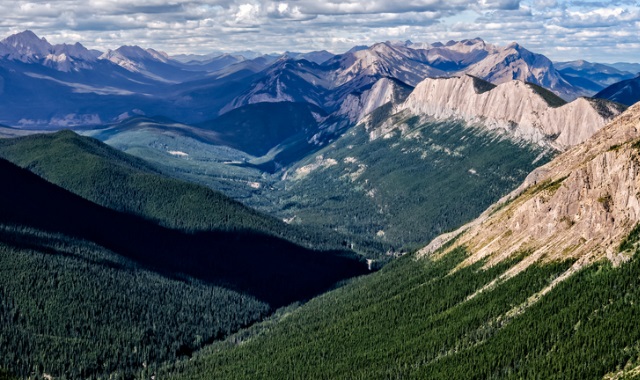 Near Miette Hot Springs, the Hottest in the Canadian Rockies. 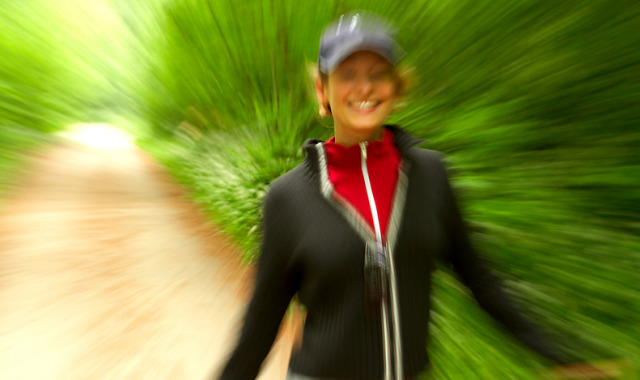 Hikers visiting or living in Jasper delight at this beautifully wild area's ability to make one truly feel alive. 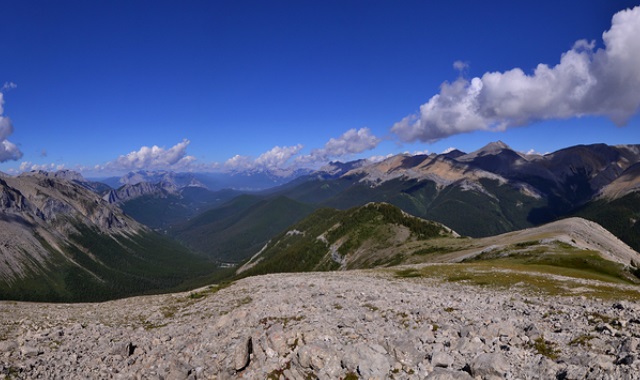 Multi-Day Backpacking The Skyline Trail 25 of the 44km Above Jasper's Treeline.

One of the best backpacking trails in Canada's Rockies. 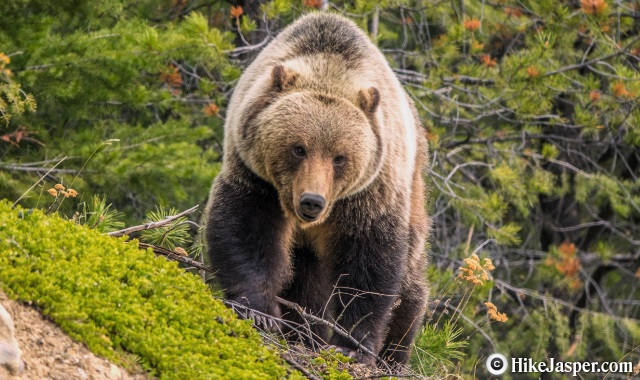 Give them Room Wildlife on the Trails Respect their home.

Give wildlife lots of room while hiking in Jasper. 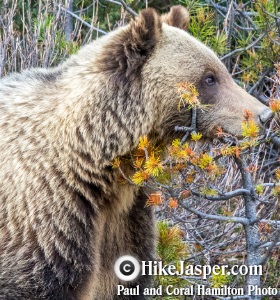 Alpine start
Packing all your gear the previous evening and starting early in the morning; being efficient.

alpine zone
An ecozone that does not contain trees because it is at high altitude.

aiguille
High rock face that has seen rockfalls, which have considerably affected the structure of the mountain and destroyed a number of routes.

arrest (self)
Maneuver - a climber that is falling; on snow slope arrests (stops) the slide by himself or herself without recourse to a rope or other belay system.

bare-boot
Hiking without use of crampons, showshoes, skis, or other traction aids.

backcountry camping
Camping backcountry should be lightweight and durable. Harsh conditions such as cold weather and strong winds may need to be endured. Backcountry hikers may have to carry portable stoves and may require permits.

bergschrund
A bergschrund is a crevasse that forms where moving glacier's ice separates from stagnant ice above.

blaze
A possible mark used to identify a hiking trail.

book time
Estimated time required for hiking a trail; also.. Reservations required with possible fees for hiking in Jasper. You may book hiking time up to three calendar months in advance of your visit to Jasper.

Bail
Retreating from a climb.

Belay on
Belayer confirming belay has been (re)applied to climbing rope.

Bergschrund (or schrund)
Crevasse forming on upper portion of glaciers, where moving sections pull away.

Beta
How to complete a particular climbing route.

Beta flash
Clean ascent of a climb on the first attempt.

Bouldering
Climbing large boulders. Typically this is close to the ground.

Buttress
Prominent feature jutting out from a rock or mountain.

break trail
verb: in winter, to hike in the lead position, or establishing a passable trail no trail existed before.

cairn
Man-made pile of stones, often in conical form. Cairns are often erected as landmarks. They can be placed on junctions or places where the hiking trail direction is not obvious, may mark a burial site. In Coastal areas, cairns may have been used at times as lighthouse-like holders for fires that guided boats.

car-camp
"Car camping" is camping in a tent, near your vehicle / car.

carabiner
Ger. karabiner - metal loop with a sprung or screwed gate. The carabiner loop part opposite the gate is referred to as the spine.

Chalk bag
Holder for a climber's chalk; for easy access during a climb.

Clipstick
Bolted climbing - extendable pole that allows climbers to reach the first bolt from the ground.

crampon
Attachments to outdoor footwear, featuring metal parts to provide traction on snow and ice. Crampons can be made of hardened steel, or light weight aluminum.

Crux
Difficult portion of a climb.

Death triangle
Anchor created by connecting closed loop of cord between two points of protection and suspending the rope clipped to one strand of anchor. Dangerous, ineffective anchor.

Dihedral
Inside corner of rock; more than a 90-degree angle between rock faces.

duck
Cairn pointing in the direction of your hiking route.

Friction
Climbing by relying on the friction between sloped rock and the climber's weight.

Glacier travel
Walking or climbing on a glacie.

Grade
Measure of technical difficulty of a hike.

highpoint
Highest elevation in a hike.

Horn
Pointed protrusion of rock that can be slung; makes a good hand hold.

krummholz
Feature of subarctic and subalpine tree line landscapes. Freezing winds cause vegetation to become stunted and deformed. Under these conditions, trees can only survive where they are sheltered by rock formations or snow cover.

lean-to
Shelter with a sloping roof.

notch
Route through a mountain range or over a ridge.

orienteering
Sport requiring navigational skills using a map and compass to navigate from point to point in diverse and usually unfamiliar terrain.

pass
Can locally be the highest or lowest point on that hiking route...easiest to navigate.

peak bagging
Activity in which hikers and mountaineers attempt to reach the summit of some collection of peaks.

piton
Metal spike that is driven into a crack or seam in the rock, which acts as an anchor to protect the climber against the consequences of a fall.

prominence
Measure of how far a mountain peak rises above its neighbor(s).

rappel
Controlled descent down a rock face using a rope.